We are very pleased to announce the latest stable release of Learn-OCaml, version 0.14.1.

Many thanks to all users who reported bugs and feature requests!

A comprehensive list of the fixes and enhancements offered by this release is available in the Release Notes, and the corresponding opam-repository pull request is pending.

If you are using learn-ocaml.0.14.0, we strongly recommend that you update your version to 0.14.1 to benefit from these latest fixes.

In particular, this release removes the automatic dialog “A more recent answer exists on the server. Do you want to fetch the new version?” that was showing up after 180", but happened to be flawed:
Instead, the exercises view now contains a 3-fold Reload button that allows end users to retrieve the Template, the latest draft, or the latest graded version: 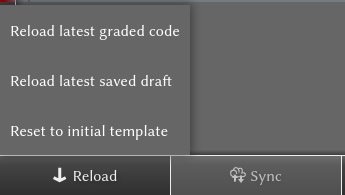 If need be, feel free to open issues in the Learn-OCaml bug tracker or the learn-ocaml.el bug tracker, or post in this thread to share comments.