I ran some test 5 times.
I show the average +/- one standard deviation. 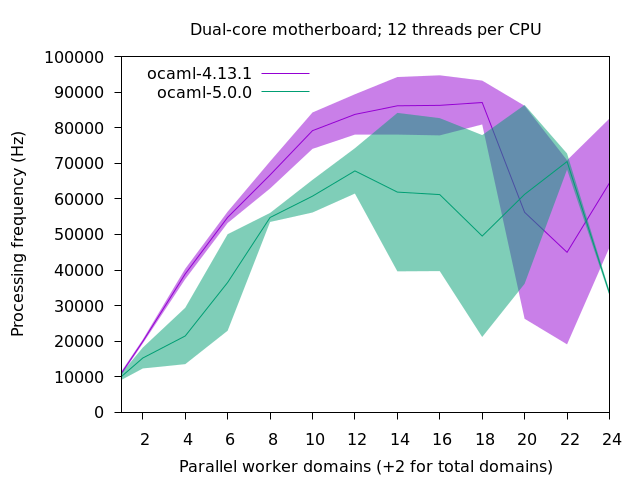 I was running this program: GitHub - tsudalab/ACP4: AutoCorrelation of Pharmacophore Features

The peak performance on this computer is reached by ocaml-4.13.1.
The program is parallelized using parany, so in the 4.13.1 case, the parallelism is fork-based
and values are serialized by Marshal.
In 5.0.0, it uses Domains and Domainslib.Chan (Marshal not needed).

What the program does, in essence:

I had to do some work so that the program parallelizes better.
In essence, I make the parallel work function do more things (coarser grain), the input function
should do the least work; same for the output function.

I might test later this week on another computer, with more computing threads.

For my personal records, so that I can rerun this later:

Is this workload intrinsically partitionable ? If so, then it shouldn’t be surprising that 4.13.1 beats 5.0, since partitioning will always incur less overhead than multithreading for truly partitionable workloads, right?

The input file can be cut into independent chunks, if this is what you are asking for.

In that case, it seems likely you cannot improve over just plain partitioning.

I ran some test 5 times.
I show the average +/- one standard deviation.

You cannot use 5 sample points and expect to measure a meaningful standard deviation even if the distribution of your sampled data is exactly a gaussian. More generally, standard deviation is not that meaningful without the hypothesis that the underlying distribution is a gaussian, and in presence of scheduling I expect this hypothesis to be false.

Also, when reporting parallel results, it’s worth reporting the CPU type, # cores, hyperthreads-per-core, etc. Basically, the contents of /proc/cpuinfo , or output of lscpu .

Also, to follow along the path @octachron started down, you might want to construct a series of test inputs, each one doubling in size, and then run each scenario a large # of times on the smaller inputs (which will not take very long) and then as the inputs get larger, you will know whether you can reduce the # of runs, by watching the spread (variance? Not a prob/stats guy) in results.

I was not expecting the variance to be so huge and I wanted to minimize the number of experiments, so that the bench runs reasonably fast; hence the “only” 5 experiments per data point.
But, we are not here to discuss the fine points of statistics, what I see is what I call a “performance regression bug”. And, this is not good news.

If other people have parallel programs that they can run end-to-end, and test against ocaml-5 and before, this might be useful data.

what I see is what I call a “performance regression bug”. And, this is not good news.

You are not reporting a performance regression since you are comparing different parallelization methods? Process parallelism is expected to be faster in absence of communications and synchronization between processes and it is still available in OCaml 5.

There are 1-to-N and N-to-1 communications in this program.
Hence, the domains (or process) are synchronized by exchanging “messages”, if you want.

How long do these programs run?

TL;DR if your workload is “embarrassingly partitionable”, it is highly unlikely you will be able to do better using multithreading, than you can do using process parallelism. This is known, and is the case for basically every language runtime in the universe: OCaml isn’t special here.

Can you describe the pattern of communication ? From your description, it seems like it might be something like “scatter-gather” – that is, a main thread scatters work units to workers, who process and return the results to the main thread, who assembles them? If

then it can often be more-efficient (and more-performant) to use process-parallelism.

These sorts of workloads have a name: “embarrassingly partitionable”, and it is because it doesn’t take much to convert them to run well using multiple processes. And if you can do that, it will always, always be faster than using multithreading, and for many, many reasons.

Commercial transaction-processing software vendors have explored many of these issues, as have HPC code implementors. Multithreading isn’t actually the best way to get peak performance: it’s just often a good way to get decent performance out of an SMP without working insanely hard.

Even here, I would note that there’s a difference between SMP and “multicore”. The latter term (in the commercial world) is synonymous with “NUMA” (non-uniform memory access) and naive multithreading (any form of multithreading that doesn’t take into account which memory banks are used to store various data, and their relation to the processor sockets where threads run to access that data) is known to perform suboptimally on NUMA machines. And these days, there are a whole lot more NUMA machines that you might think, b/c Moore’s Law for frequency scaling has stopped.

I was always told “fork is faster than smp”, almost as conventional wisdom. It’s nice to see it visualized!

BTW I just remembered something I wrote two years ago: it’s for the “programming language drag race” and I wrote it because OCaml’s score felt way too low. Never got to actually submitting it though. It further confirms this observation (but not visually):

I do not read too much into the chart. There could be improvements to make to the program, or to the multicore runtime implementation, or both.

However, I see proposed around a lot the explanation of inherent synchronization costs of SMP runtimes. This should not be used to discard legitimate questions and explorations about consequences of the design choices of the multicore runtime (for instance, a stop-the-world collector that empties all minor heaps whenever one minor heap is full).

I think it is a valid point. I very much do not embrace the argument saying « choose the right architecture for the job » here. If one has to resort to forks for a simple performant map/reduce it means Ocaml multicore abstraction leaks (in time).

It would be interesting to understand the Intrinsic Parallel Efficiency of an Ocaml program with respect to at least the GC (minor and major) and the major allocator.

As far as I understand the minor GCs work in 1) lock-step and are as a consequence is 2) tail sensitive (to the most allocating among N). Also the major allocator is a global parallel allocator which has to cope with generational copy.

Intrinsic Parallel Efficiency: Maybe one way to characterize would be:

Also mentioned in another discussion about domains: the tail latency (wrt lock steps) induced by thread scheduling, which may suggest a sensitivity to noisy neighbors / too many domains. What is not part of IPE is synchronisation nor cache costs nor NUMA, nor // algorithm efficiency, as they are concerns regardless of the language.

It is still early days, Ocaml team has done an incredible job with multicore, we will all benefit from gaining an understanding in the characteristics and inevitable trade-offs made during this journey.

If you have proper statistics of a parallel implementation comparing ocaml-5 to ocaml<5, it would be interesting to share them.

The program is parallelized using parany, so in the 4.13.1 case, the parallelism is fork-based.
In 5.0.0, it uses Domains and Domainslib.Chan.

Sorry, I didn’t spend much time digging, but is there a simple way to replicate your test?

Ideally some git repo that one could clone and then run some shell script(s) to run it within a switch that has OCaml 4 or OCaml 5.

My particular interest is to take a quick look at the OCaml 5 version and see if there is potentially some simple way to make it faster or to identify particular things to improve in OCaml 5. I make no promises, however.

I need to share my test data file, that’s the only obvious thing missing.
This is a regular opam package, so installing it should be a matter of opam pin
to the git repository.
I am not particularly interested in people trying to optimize the program.
Rather, I would be more interested by stories of other parallel programs which have an ocaml<5 and an ocaml-5 version.

I am not particularly interested in people trying to optimize the program.

Hot take: the problem with your benchmark is that it is not clear that you used Domains correctly, or whether you made programming mistakes that limit the scalability of the Domains version. For example, you mention that the benchmark displays on the x axis the number of compute domains, but that there are also 2 mostly-idle domains used for control. This is a performance antipattern for Domains programming, and it is hard to know whether this invalidates the performance results or not. I have already made this point last week: No Domain.maximum_domain_count() in the stdlib - #28 by gasche.

This benchmark is a comparison of a finely-tuned multi-process version developed over time by a domain expert (you) and a hastily-, naively-written multi-domain version developed by a newbie (you). Good luck interpreting that.

What I gather from this interaction and your experiment is that:

It is not clear to me that it’s a valuable use of our time to discuss bad benchmarks such as yours. On one hand, maybe we should try to focus first on code that follows the recommended Domain programming advice. On the other hand, people in the wild write wild code, and it’s less hassle for everyone if that also runs fast enough. My personal intuition is that we should still focus on “good” benchmarks first, and figure out library designs that make it easy to write “good” programs.