Easy way to build and distribute OCaml executables for all the popular platforms?

Eventually, I would like some solution to this problem:

Even for opam users, it would be nice to have binary installations of executables that have no runtime dependencies (static builds) because it’s faster to install and doesn’t depend on specific versions of source packages. For example, a static build of the atdpy executable would have no runtime dependency at all (both itself and the code it generates). It’s really just one executable file. It would be great to have an easy way to build such binaries and make them available via pip since it’s what Python users use. A source installation with opam would be too bothersome for them.

What have you used for this and how satisfied are you?

Although dkml-install-api is not yet released, if you or anyone else is interested in contributing or nudging the development, file an issue / send a PR / message me on Discuss.

Some more possibilities for distributing applications: flatpaks, snaps, appimage.
They have their downsides though:

If your application is not a GUI I’d recommend shipping it as a Docker container though. That should be fairly portable to run on most distributions, and even on distributions that do not have Docker available by default: they have podman which does a pretty good job at running them (there is also now an OCI standard for containers).

And aside from a Docker container as packages built on the release you are shipping for. Although building on an older version and using it on a newer one might in some limited cases, I’ve run into trouble with that in the past when upgrading between minor CentOS 7.x versions (there was an ABI breakage in libnss, but CentOS has purposefully overriden the soname and claimed there was no ABI change, but of course things broke at runtime when built on old NSS and run on new, solution was to rebuild the application requiring the newer NSS as a minimum dependency).

Building and shipping individual executables without a package manager and without containers is likely to run into problems eventually (especially as newer distros get released). There was also an older standard called Linux LSB (and you could configure your compiler to be LSB-compliant, i.e. only make headers/libraries/symbols available that the LSB defines). However in practice there were some crucial symbols missing there, and not many distros are actually LSB compliant (so e.g. trying to build and ship something like nginx using LSB didn’t quite work).

You could use a service such as openbuildservice.org that supports building packages for multiple distributions (both rpm and deb based): openSUSE:Build Service supported build targets - openSUSE Wiki

Another possibility is to define a list of distros you support and use containers to build a package for each distribution (this is actually fairly simple to automate and parallelize and if your package is small building it for all distros will be done in no time, especially if you use Docker layer caching effectively to preinstall your build dependencies in a layer).

Nix closures might also work, but they’re a bit heavy (I think you would end up shipping everything including a libc, which might be older than what the user has on their system), although in the end Docker images are the same, except the libc version you get would be more “well known”.

Although pip might seem like a nice solution, in practice I’ve run into various compatibility issues especially with libraries related to numpy, opencv, ghostscript. I ended up either having to install distro packages for some, and use pip prebuilt packages for the rest, or forcing pip to rebuild all packages and not use binary packages. This is especially problematic when a new distro comes out, e.g. with Python 3.9->3.10 version bump and nothing on pip supports it quite yet. None of the py 3.9 prebuilt binaries would’ve worked in that environment. Here is one such example where pip binary packages go wrong (especially as various pieces of the python ecosystem upgraded their numpy dependencies at different rates): Install numpy-1.20.0rc1 causing errors · Issue #534 · dask/fastparquet · GitHub 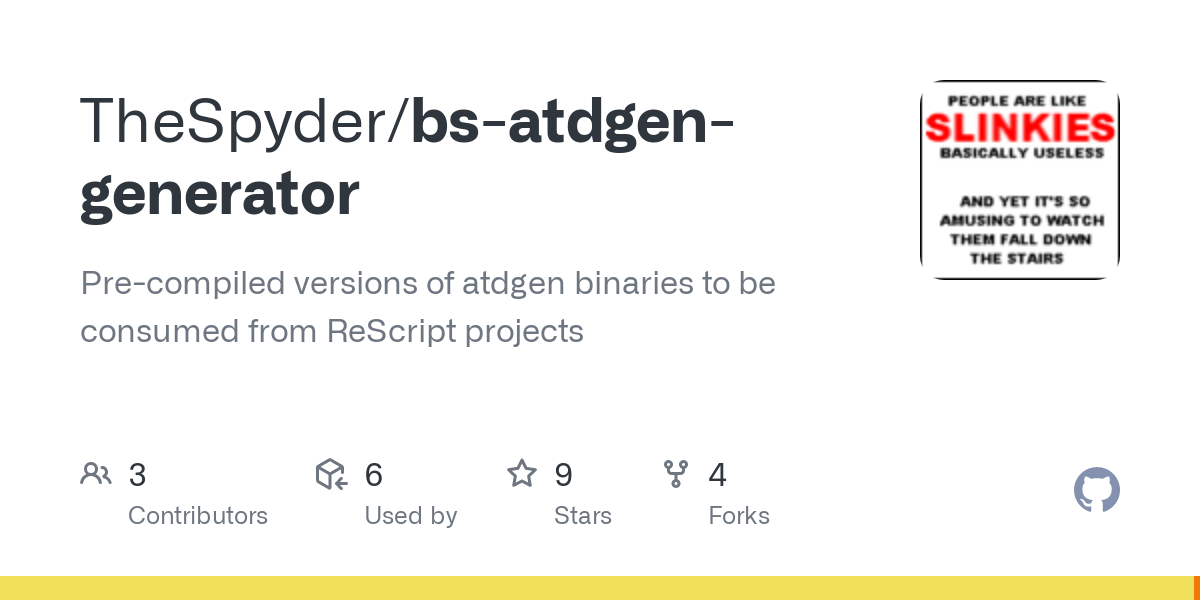 This project by @jchavarri and @spyder is building atdgen binaries for 3 platforms using github CI. It might be a good starting point.

A hackish solution but that might be good enough given that the resulting program is meant to be used by developers, is to compile atdpy with js_of_ocaml. It used to be possible for atdgen, no reason that it would have stopped. You’d end up with a single js file that is easy to distribute and can run anywhere there’s nodejs.