@esope I think that your suggestion works, but (besides being convoluted) it forces all field decoders to have the same result type, which is a severe limitation in expressivity. I could inject them into a large sum, and then “gather” this into a product (your record combinator does this internally).

I hadn’t looked at peek closely, and indeed it looks like it could be a better solution – if you are willing to traverse the input several time, which is fine by me. Something like (not tested):

Note: in the short term I’m planning to give Decoders_sexp a try as suggested here, so I’m just passing by, please don’t spend too much time on this if I am the only prospective user.

People always want something, either sexp or json or their favourite thing du jour (15 years ago it would have been XML). It’s a good idea not to have this in the stdlib.

There is absolutely one representation for sexprs that several libraries use:

and I’m not saying the stdlib should pack a parser. Only the type (just like Uchar for a while). Your argument of “thing du jour” holds for everything, we also shouldn’t have Map because it’s AVL based, so, passé, when these days we should use HAMTs or RRB trees or whatnot. The stdlib can contain a few compatibility types and not implode.

and then just have csexp and sexplib instantiate it with strings for their particular definitions of sexps.

I think we need to add support for YAML and JSON in the stdlib. These are critical wire-formats and datatypes all over the industry, and if OCaml is going to remain relevant, it needs to support them. I hear that TOML is coming on fast, and so we oughta support that too.

Indeed, I think that s-expressions are the least important and urgent to add: only theoreticians and guys like me who grew up coding Scheme, care about 'em. Everybody else has moved on … N times and is planning for the N+1-st move to some new format.

If s-expressions are so widely-used, I don’t see the problem with putting them into some nearly-stdlib library and being done with it – everybody who depends on them can just depend on that library.

And I’m (almost, but not quite) serious about YAML and JSON, actually. They’re everywhere in the business. everywhere.

Alright, I don’t want to pretend like this is a “solution” or something. Just that, maybe this is an indication of a way to go forward. And of course, what I’m really arguing is “@stedolan’s onto something with jq, my friends”. 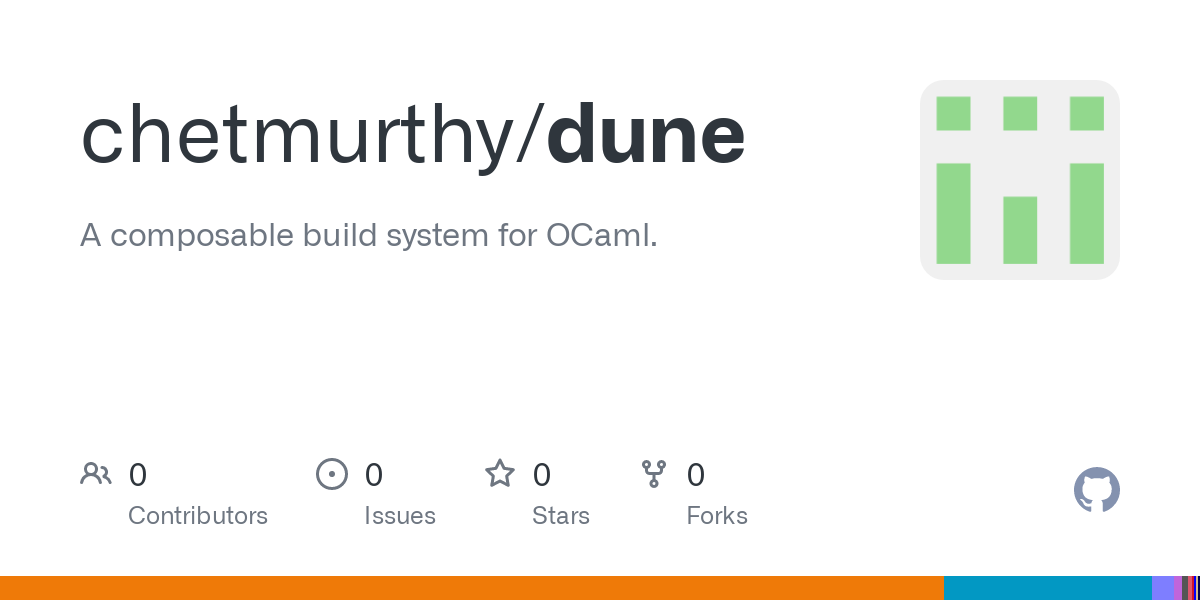 A composable build system for OCaml. Contribute to chetmurthy/dune development by creating an account on GitHub.

a sandbox for files that are OK to make public. Contribute to chetmurthy/sandbox-public development by creating an account on GitHub.

What does it do?

If somebody can point me at a dune project that actually has module_deps fields in it, I can make it do the rest that @gasche asked for.

So the final result (for yojson – for dune it’s much bigger, b/c so many executables):

OK. So that was kind of complicated to explain, b/c I didn’t explain the JQ streaming model, or filters, or anything else. But … just look at how compact the query is, and … trust me that it’s actually very readable and … has the nice properties we’d want of a query-language.

Slightly OT, but if we’re looking at the original problem, then

I want to write a simple script to consume some s-expressions output by dune and do something with them.
…
And I’d like to get the “name” and list of modules and their dependencies for each “executables” of the toplevel list.

For this problem, the following assumption seems to be needlessly strong:

(Note: here I consider that the s-expression I get is random, and may not fit an OCaml type.)

Because dune uses sexps for serialisation, and dune itself is written in OCaml (and thus is serialising OCaml values), there’s a good chance that the s-expression should fit into an OCaml type no?

I would like to convince you to look at this differently and far more aggressively. I think what you should be looking for, is a way to treat sexp/JSON/YAML/whatever as a queryable database. That means you want a query-language that is fully-capable of doing both projection (and hierarchically) but also transformation and summarization, in the style that SQL can do for relational data.

And yoou want that query-language to be succinct and amenable to scripting-like accretive programming. Again, this is what you get when you use SQL against relational DBs.

Literally, once upon a time an esteemed professor from grad school called me up and said “Chet, I have this JSON data and I need to extract thus-and-such, summarize thus-and-such, can you help?” and I wrote him a JQ script in, like, ten minutes. And that time also, I had to remember JQ in order to write the script.

As an aside, SQL databases are really starting to have this kind of features for JSON too! Postgres has had it for a while, and sqlite recently added shorter forms for its JSON extension. So you can mix JSON and other relational data in a sqlite file and use the query language!

I think we need to add support for YAML and JSON in the stdlib. These are critical wire-formats and datatypes all over the industry, and if OCaml is going to remain relevant, it needs to support them. I hear that TOML is coming on fast, and so we oughta support that too.

This, but entirely unironically. Yaml is more of a config language, but you can’t lift a stone without finding a handful of json files beneath these days. Not having JSON support is like not having utf-8 support (… which we only just added recently?).

When you write compilers like it’s 2000, it’s fine not to have JSON. But as soon as you touch anything networked, http and JSON are everywhere (and also, hex, base64, etc. but I digress). It’s a pity not to have them. Even for compiler-style programs, provers, etc. these days it’s hard not to want to provide JSON diagnostics or metadata — e.g. META files done today would very likely use that format.

This, but entirely unironically. Yaml is more of a config language, but you can’t lift a stone without finding a handful of json files beneath these days. Not having JSON support is like not having utf-8 support (… which we only just added recently?).

When you write compilers like it’s 2000, it’s fine not to have JSON. But as soon as you touch anything networked, http and JSON are everywhere (and also, hex, base64, etc. but I digress).

We need query and computation languages over JSON for the same reason we needed relational query languages.

[1] YAML has these weird bits of syntax that most people don’t use, b/c they recognize that different YAML parsers accept different subsets of the language. It’s all a big mess. I came up with my own subset, designed so that one could write a parser in any language that would accept that language on-the-nose, but hey, not like I can convince anybody to use it: GitHub - chetmurthy/yay: YAY Ain't YAML

FYI, for JSON, Tezt has some combinators that I find very nice to use in practice: tezt/lib/JSON.mli · master · Tezos / tezos · GitLab

One nice feature is error messages give nice locations. For instance, assuming json has an origin of "file.json" (the origin is set at parse time), you can get errors like:

A typical example to decode a record would be:

One drawback is this approach is quadratic in the number of record fields though. The alternative is to iterate over each field one by one, setting mutable values along the way, before packing all those mutable values in a record, but that’s quite annoying to write.

I’m sure something like this can be done for s-expressions.

One drawback is this approach is quadratic in the number of record fields though.

This is one of the reasons you want a query language and not a set of combinators.

I was responding to @gasche 's original problem. There, the issue is to construct some cut-down data-structure from the original full sexp/JSON. In an earlier comment in this thread, I mentioned that I’d written an OCaml implementation of @stedolan 's jq; so did someone else: Query-json: Re-implemented jq in Reason Native/OCaml ) ; two thoughts:

Now that I think about it, it seems … obvious that we could repurpose jq to solve your problem pretty much on-the-nose. Imagine:

This is a simple transformation of JSON to s-expressions, and you could construct the reverse, so that sexp->json->sexp is the identity function (ignoring case #3).

Then, one could just reuse JQ to do the querying.

It seems like that’d solve your problem? And since there are two different JQ implementations in OCaml …

This library might be what I was looking for for parsing the kicad schematics file format (for instance here ).

However, sorry to piggyback on this thread, but I don’t see how to parse a list of a sum type such as the description of a symbol

The gitlab instance is not opened to external users, so its issue system is quite useless.

I just wrote a parser for my input data using Decoders_sexplib, and the result works. It’s the only library recommended in the thread that solves my specific problem, so far.

Note that entry_decoder is an example of a decoder working on a sum type / variant as you mention:

The gitlab instance is not opened to external users, so its issue system is quite useless.

Yes, gitlab.inria.fr is a bad place to host community-oriented free software. Unfortunately the admins are aware of it and they don’t want to change this (and don’t have the workforce resources to change it), and most users don’t think too deeply about the implications of their hosting choice, or are not aware of the problem. I think the best route is to ping the authors kindly (here @esope) to see if they would consider hosting their software on gitlab.com instead – or some other place.

It’s the only library recommended in the thread that solves my specific problem, so far.

Just curious what didn’t work with Sexpq ? I didn’t follow closely but I don’t see what you couldn’t possibly express.

I’m not sure but I think that it normalizes (polyline foo bar) into something like (polyline (foo bar)).

That’s one of problem with s-expressions. There is no well defined encoding of dictionnaries, or rather people who write them by hand do not want to use the clean ones.

In lisp you would write them as a list of bindings, a binding being (key . <s-exp>).

So we end up with this bastarized notion of binding which is not so great since you can no longer distinguish between a binding to a singleton list and a binding to an atom without external knowledge (it also makes substitution and other operations harder than it could be).

I didn’t try serialk because I understand that it’s not released / available on OPAM yet. The design looks nice, but I’m planning to include my sexp-extraction code in a PR in an upstream project and I want to stay with opam-released dependencies.

Unrelated: one thing I appreciate about Decoders (and I guess Serialk too) is that thought was given to error reporting. It’s not something that my quick&dirty hand-written do, and I think that’s a large part of the value of using a specialized library.