Dear OCamlers, I am satisfied to announce the first official release of the package memprof-limits (v0.2.0).

From the user guide (which has detailed examples and use-cases):

This package lets you interrupt tasks in a thread-safe and resource-safe way, when a resource limit is reached or a cancellation token is set. A task is an isolated piece of computation running within a thread.

The name comes from the fact that it uses OCaml’s Memprof statistical profiler engine (to perform limit checks frequently-enough, related to the allocation rate of the program, and at the same time rarely-enough to not affect performance).

It comes with an implementation of masking that lets you define interrupt-safe resources that are guaranteed to be cleaned-up, and with them ensure that your program remains in a valid state after being interrupted.

To learn more about it, I recommend again the user guide.

You can try it with OCaml 4.12 on the following example (opam install memprof-limits → utop → #require "memprof-limits";;):

A worker task allocates 300M words, only 3k of which live simultaneously. This comes close to an allocation limit of 330M words set by the monitor. The probability that the worker is interrupted is less than 10^-50, and thus the computation successfully completes, in about a second.

My talk at the OCaml workshop about memprof-limits (and reasoning about exceptions in general) is now available online: 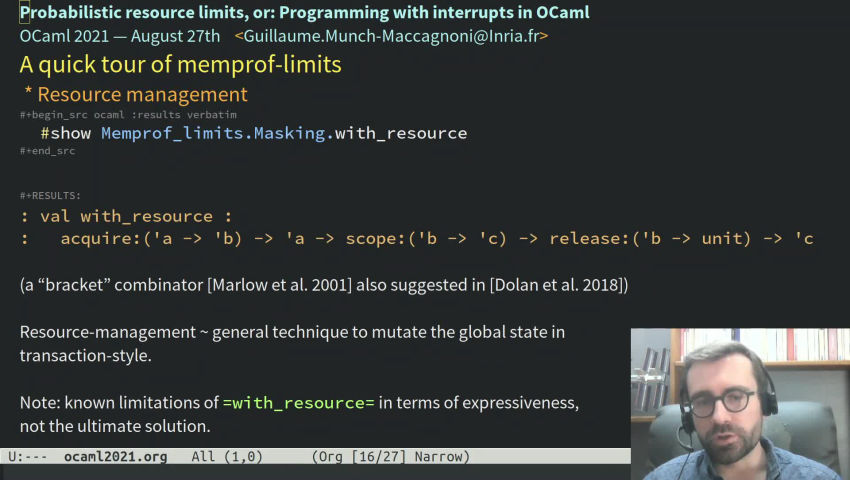 The goal of this talk is two-fold. First, we present memprof-limits, a probabilistic implementation of per-thread global memory limits, and per-thread allocation limits, for OCaml 4.12. Then, we will discuss the reasoning about programs in the...