Multicore OCaml: September 2021, effect handlers will be in OCaml 5.0!

Welcome to the September 2021 Multicore OCaml monthly report! This month’s update along with the previous updates have been compiled by me, @ctk21, @kayceesrk and @shakthimaan. The team has been working over the past few months to finish the last few features necessary to reach feature parity with stock OCaml. We also worked closely with the core OCaml team to develop the timeline for upstreaming Multicore OCaml to stock OCaml, and have now agreed that:

OCaml 5.0 will support shared-memory parallelism through domains and direct-style concurrency through effect handlers (without syntactic support).

The new code will have to go through the usual rigorous review process of contributions to upstream OCaml, but we expect to advance the review process over the next few months.

Recap: what are effect handlers?

Below is an excerpt from “Retrofitting Effect Handlers onto OCaml”:

Effect handlers provide a modular foundation for user-defined effects. The key idea is to separate the definition of the effectful operations from their interpretations, which are given by handlers of the effects. For example:

declares an effect In_line, which is parameterised with an input channel of type in_channel, which when performed returns a string value. A computation can perform the In_line effect without knowing how the In_line effect is implemented. This computation may be enclosed by different handlers that handle In_line differently. For example, In_line may be implemented by performing a blocking read on the input channel or performing the read asynchronously by offloading it to an event loop such as libuv, without changing the computation.

Thanks to the separation of effectful operations from their implementation, effect handlers enable new approaches to modular programming. Effect handlers are a generalisation of exception handlers, where, in addition to the effect being handled, the handler is provided with the delimited continuation of the perform site. This continuation may be used to resume the suspended computation later. This enables non-local control-flow mechanisms such as resumable exceptions, lightweight threads, coroutines, generators and asynchronous I/O to be composably expressed.

The implementation of effect handlers in OCaml are single-shot – that is, a continuation can be resumed only once, and must be explicitly discontinued if not used. This restriction makes for easier reasoning about control flow in the presence of mutable data structures, and also allows for a high performance implementation.

You can read more about effect handlers in OCaml in the full paper.

Why is there no syntactic support for effect handlers in OCaml 5.0?

Effect handlers currently in Multicore OCaml do not ensure effect safety. That is, the compiler will not ensure that all the effects performed by the program are handled. Instead, unhandled effects lead to exceptions at runtime. Since we plan to extend OCaml with support for an effect system in the future, OCaml 5.0 will not feature the syntactic support for programming with effect handlers. Instead, we expose the same features through functions from the standard library, reserving the syntax decisions for when the effect system lands. The function based effect handlers is just as expressive as the current syntaxful version in Multicore OCaml. As an example, the syntax-free version of:

One can imagine writing a ppx extension that enable programmers to write code that is close to the earlier version.

The 4.12+domains opam switch has all the features that will go into OCaml 5.0, including the effect-handlers-as-functions. The exact module under which the functions go will likely change by 5.0, but the basic form should remain the same.

The 4.12+domains+effects opam switch will be preserved, but the syntax will not be upstreamed. This switch is mainly useful to try out the examples of OCaml effect handlers in the academic literature.

To learn more about programming using this effect system, see the eio library and this recent talk. In the next few weeks, the eio library will be ported to 4.12+domains to use the function based effect handlers so that it is ready for OCaml 5.0.

Onto the September 21 update

A number of enhancements have been merged to improve the thread safety of the stdlib, improve the test suite coverage, along with the usual bug fixes. The documentation for the ecosystem projects has been updated for readabilty, grammar and consistency. The sandmark-nightly web service is currently being Dockerized to be deployed for visualising and analysing benchmark results. The Sandmark 2.0-beta branch is also released with the 2.0 features, and is available for testing and feedback.

We would like to acknowledge the following people for their contribution:

As always, the Multicore OCaml updates are listed first, which are then followed by the updates from the ecosystem tools and libraries. The Sandmark-nightly work-in-progress and the Sandmark benchmarking tasks are finally listed for your reference.

We would like to thank all the OCaml users, developers and contributors in the community for their continued support to the project. Stay safe!

In multicore the OCaml runtime will be much more sophisticated than before. Inevitably there will be bugs in user code due to data structures being accessed by threads running parallely.

I know there was a project a few years ago by @mshinwell to improve support of OCaml in gdb but that project was never merged into trunk. How will people debug OCaml multicore programs more easily? Are there plans to revive improved gdb support for OCaml?

Firstly, congratulations to all of the people working on multicore (and effects), this feels like a huge and well-deserved milestone 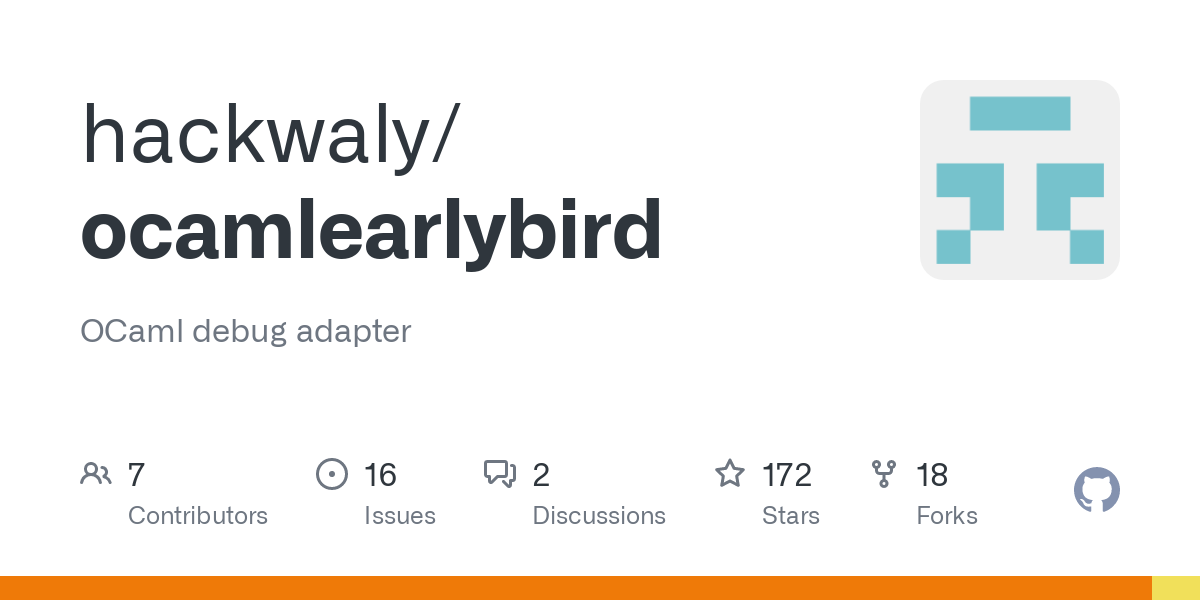 OCaml debug adapter. Contribute to hackwaly/ocamlearlybird development by creating an account on GitHub.

This is quite exciting. When is OCaml 5 expected to be released?

Effect handlers currently in Multicore OCaml do not ensure effect safety . That is, the compiler will not ensure that all the effects performed by the program are handled. Instead, unhandled effects lead to exceptions at runtime.

Just thinking out loud here but, if effects are a generalized form of exceptions, and there is a plan to, at some point, for the compiler to ensure effect safety–then does that mean that effectively it will also ensure exception safety at compile time? I.e. a more advanced form of Type-based analysis of uncaught exceptions.

The debug adapter that you link to is a vscode extension to interoperate with the ocamldebug program that comes with OCaml. ocamldebug is a command line debugger for Ocaml bytecode programs.

The questions OTOH I have are (a) Are there plans to improve support for debugging native multicore OCaml executables under gdb (basically better OCaml specific support while using gdb. Just like gdb provides decent support while debugging rust for instance) ? (b) Relatedly, what is ocamldebug's future for debugging bytecode under multicore?

The multicore effort is all on track for integration into OCaml 5.0 early next year

The above according to Multicore OCaml: August 2021 at least.

We’ve gone to some effort to preserve DWARF unwinding correctly in multicore OCaml (see the effects paper for more details). You may also want to check the debugging tips and tricks in the OCaml multicore wiki which has info on how to use gdb and rr. You do get your functions back as mangled names, but it’s pretty easy to visually map those back to their original OCaml function names by inspection.

Thanks a lot for that. As a colorblind person, I really appreciate it. As a way to partially automate that, there are markers with matplotlib. I’ve taken a look at the repo, and I believe that this plot is generated on the rps_df.plot(xlabel="load requests/second", ylabel="serviced requests/second") line. If that’s the case, here’s to add markers to it:

I haven’t been able to run the benchmarks on my machine, so I can’t show you the real version, but here’s a minimal example with the result:

Is the 2nd snippet supposed to compile on 4.12+domains, or is the effects-as-fns pseudo code? Forgive me if I misread the above update.

Yes, 4.12.0+domains is good and should compile the snippet (modulo some ommited opens).

See this example from the testsuite: Expose deep and shallow handlers as functions by kayceesrk · Pull Request #651 · ocaml-multicore/ocaml-multicore · GitHub

Is there a library I need to add to my dune file?

P.S. I investigated this some more – the PR Expose deep and shallow handlers as functions by kayceesrk · Pull Request #651 · ocaml-multicore/ocaml-multicore · GitHub that is linked to was merged on 22 Sep 2021. But the opam switch 4.12+domains that I have on my local machine is older than that. I realize the switch is based on the multicore git repository and not a frozen archive file!

Now I’m going to try to get the example working.

Thanks! What a treat. I tried it out on a toy project and it was a delight. Excellent work, all.

The multicore eio lib has now been migrated to the syntax-free version. This is the version of effects which will be available in the upcoming OCaml 5.0.0.

I started a ppx. Not polished in the slightest, but compiles and does the basics.

Very cool! Great to see more PPX authors out there.

You may be interested in CraigFe/ppx_effects, which I’ve been tinkering with for a few days. It has the same goal, but makes some different API choices. We should join forces!

Super cool. I ended up swapping my impl fully with @Gopiandcode’s impl. I’d be interested in to cohack/maintain the pkg. If you have a community repo in mind, please share! Otherwise, I’d be happy to seed one over in the Dino-DNA GitHub org.