Good job!
Will I be able to install without admin privileges if the MS compiler toolchain is already installed?

Thanks! Please send them over @yawaramin

Will I be able to install without admin privileges if the MS compiler toolchain is already installed?

No, but … I was trying to be very conservative because Visual Studio comes with hundreds of optional workload and component IDs and a few different release years. It would be very easy for an end-user to spend days trying to figure out what went wrong with a build. But I just stumbled on microsoft/vswhere so I could add a CLI option to point at your specified existing installation (if you are willing to accept the risk of a mismatch) or an option to do a requirements query for the specific components that the Diskuv OCaml distribution needs (which might not find your installation if the version numbers don’t line up exactly). Would either option work for you?

A requirements query sounds neat!
In any case, it’s not a dealbreaker. I was just thinking about my work setup which is managed by my org. There, I have several MSVC toolchains installed already, but getting admin rights is always a bit hairy

But I just stumbled on microsoft/vswhere

Oh that looks much simpler, and it is a nice opportunity to harmonize. Thanks! I can send a PR if it needs any tweaking to work with MSYS2.

The 0.2.x release is not yet available but I wanted to give an early heads-up on upcoming breaking changes.

Why? The new Opam root will be the standard in a future release of Opam. That Opam root should work even if you are on a managed Windows machine (especially corporate/enterprise installations). One of the aims of Diskuv OCaml is to be standards compliant as much as possible, which means less hassle for you if you use another Windows distribution in the future.

Consequences: During the upgrade (instructions will be given in the upcoming 0.2.x announcement) you will be prompted to accept the deletion of the old Opam root and your old Opam switches. If you have adopted the Local Project directory structure (ex. diskuv-ocaml-starter) then ./makeit prepare-dev will recreate the Opam root and your Opam switch correctly based on your .opam files. If you have been creating Opam switches manually (which is not currently recommended because the Diskuv OCaml pinned package versions will be missing) you will use opam install ./xxx.opam --deps-only --with-test to re-install the packages in your new Opam switches.

Thanks to @dra27 for extensively reviewing Opam changes for Windows MSVC+MSYS2!

Why? If you are an OCaml package maintainer and are creating documentation for your users, it would be nice if you had the same copy-and-paste documentation for both Windows and *nix (Linux/macOS). With this rename your user instructions can be ./makeit build-dev to build your project regardless of whether your users are on Windows or *nix; that syntax works in Powershell where makeit.cmd will be invoked and it works in *nix where the shell script makeit will be invoked. There will be an example of that in diskuv-ocaml-starter in the upcoming announcement.
(An alternative could have been typing ./make but that may be confused with make)

What is the win over using esy here? Esy has solved a lot of these issues on Windows and works very well in my experience.

Not trying to downplay the huge effort here, I’m genuinely curious about the tradeoffs of choosing one tool over the other.

I think the support for Windows is incidental in both DKML and Esy, mostly because both currently depend on fdopen’s MinGW repository for Windows support.

Since DKML is so new, I’ll explain how DKML gives access to the C ecosystem:

In conclusion I’d say that Esy and DKML both provide escape hatches to the bigger Javascript and C ecosystems, and both provide an on-ramp for new users familiar with Javascript and C to come into the OCaml fold. It really boils down to whether your needs revolve around Javascript+OCaml, C+OCaml or pure OCaml.

Hope that helps. Apologies for the verbosity.

(*) Eventually I’d like to see vcpkg treated as an Opam depexts package manager for Windows. Since packages from Debian, homebrew, et cetera are almost always C-based packages, those same packages can usually be found on vcpkg. The benefits should flow to Esy users as well.

Quick question, as Diskuv OCaml is distributed under the Fair Source License, if a teacher were to tell a bunch of students to use it for coursework, would that fall under ‘personal use’ for each of them? Or would they be considered part of an ‘organization’?

I’ve been getting help from @fdopen / @nojb / @yallop to get a MSVC port of ocaml-ctypes: Library for binding to C libraries using pure OCaml integrated.

Nice, well done. I’ve wanted that for quite some time, but never managed to look into it. Can’t wait to try it

if a teacher were to tell a bunch of students to use it for coursework, would that fall under ‘personal use’ for each of them?

@yawaramin
I made it explicit on the README.md of diskuv / diskuv-ocaml. But I just realized I missed perhaps half of your question; which section do teachers and professors fall under? Those teachers and professors, most of whom are employees of a school, are clearly members of an “organization” that uses DKML and they would not have the personal grant. But it would still be free unless more than 5 teachers were teaching OCaml at the same time in the same school. I think “5” is a reasonable line for now, but your question is clarifying that supporting a single teacher with 50 students is a very different proposition than supporting a single office employee. So thanks for raising the question. And if you know of or have a situation where that line looks unreasonable, just ping me.

Thank you for doing this work – it’s the first time we’re seeing full, native integration of OCaml into Windows. I wanted to ask you: is there a path forward that reduces the setup time and requirements? I understand the need to install the VSC compiler. Building everything, however, seems wasteful. Can we just download the binaries?

Building everything, however, seems wasteful. Can we just download the binaries?

This thread was about version 0.1.x, and there have been major changes in 0.2.x and 0.3.x that address that. (Each major release had its own discuss.ocaml thread. In hindsight that was a mistake. More on that later)

In particular 0.2.6 introduced a binary release: [ANN] Windows-friendly OCaml 4.12 distribution 2nd preview release (0.2.0) - #6 by jbeckford . But the simple summary is there are some really important binaries that will fail on the end-user’s machine since they are compiled with hardcoded absolute paths:

On Linux desktops it is OK to hardcode paths because almost all Linux desktop users have sudo to install to standardized /usr/bin and /usr/lib locations. Similar situation exists for macOS desktop users. But many Windows desktop users do not have Administrator rights, and software must be installed in an arbitrary path like D:\Users\Student1234.

Until hardcoded paths disappear, the safest and simplest way is to compile the correct hardcoded path into the binaries at install time. There is an alternative that Esy uses: binary patching. For many people binary patching would be okay, but software distributed under the “Diskuv” umbrella needs to be reproducible + auditable.

Status of the various binaries:

For reference the other threads were:

The upcoming 0.4.x (which introduces a single setup.exe installer) will be announced in this thread.

Thank you for the comprehensive answer, and great job on this project. This is one of the biggest hurdles towards making OCaml more mainstream IMO.
Also sorry for missing the other threads – you might want to take the version out of the title of the thread if you’ll keep using this one (which I think is a good idea).

So assuming ocamlc becomes relocatable, what are the other things that are compiled? Just ocamlfind and ocamlbuild? I imagine they don’t take much time either.

A single setup-*.exe executable is now all that is necessary to install the Diskuv OCaml distribution on 64-bit Windows!

Today you can use a prerelease of v0.4.0 which is available at https://github.com/diskuv/dkml-installer-ocaml/releases/download/v0.4.0-prerel11/setup-diskuv-ocaml-windows_x86_64-0.4.0.exe

Once those items above are addressed, a real (non-prerelease) 0.4.0 will be announced.

Existing Diskuv OCaml users: Your existing Opam switches should be unaffected by the upgrade. But please make sure you can recreate your Opam switches (ie. use a .opam file) if something goes wrong.

Release notes, including details of the migration to the Apache 2.0 license, are at available at https://github.com/diskuv/dkml-installer-ocaml/releases/tag/v0.4.0-prerel11

suceeded by way of ‘Run by Administrator’;;

The 0.4.0 release of Diskuv OCaml for Windows users is available! It is usable enough that I’ve let my school-age kids (elementary through high school) install it and go through some tutorials. 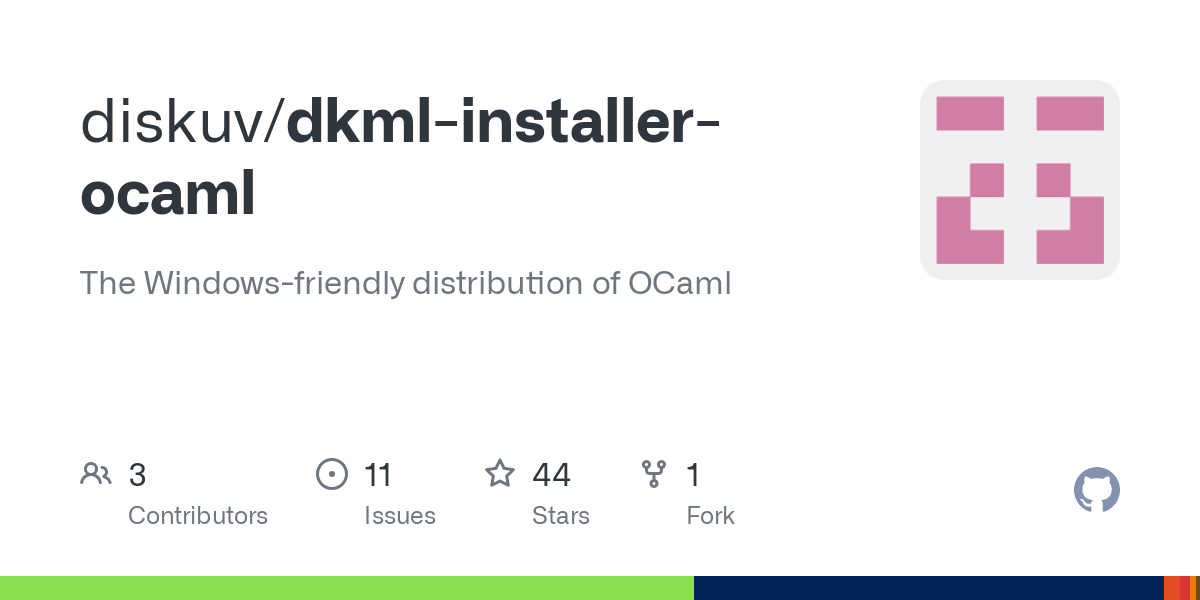 Generates and distributes installers for OCaml. Contribute to diskuv/dkml-installer-ocaml development by creating an account on GitHub.

The links to the documentation are available from the above link as well.

Here are the one-time inconveniences if you install this release:

Thanks to OCaml Software Foundation for sponsoring this!

0.4.x will be the last minor versions of the “preview”. I’ll be shifting to closing out any show-stopping bugs, and updating the various Windows onboarding guides for OCaml to officially include Diskuv OCaml.

I installed diskuv and did opam switch list-available. It responded with # No matches found. Does opam switch create not work? I am looking to try ocaml 5.0 on windows.

Use opam dkml init to create a 4.12.1 switch (use --help if needed). There is a walkthrough on Beyond Basics — Diskuv OCaml 0.4.0 documentation for how to use that.

opam switch create does work as long as you pick the right OCaml compiler, but a regular switch is not sufficient for packages with embedded Unix commands to work on Windows. opam dkml init handles the Unix bridging, the correct OCaml compilers and also the extra Windows Opam repositories for you.

OCaml 5.0? I haven’t even looked at 5.0 yet, and wasn’t planning on adding it until the 5.0 compiler and several widely used packages were ready on the MinGW flavor of Windows. That might be a while. Why wait? Because the regular Diskuv installer is prioritizing everything-should-work-out-of-the-box-on-Windows. If that timeline conflicts with something you are working on (ex. you maintain a widely used package or tool) please give feedback.